The European section consists of 15 districts with 34 countries 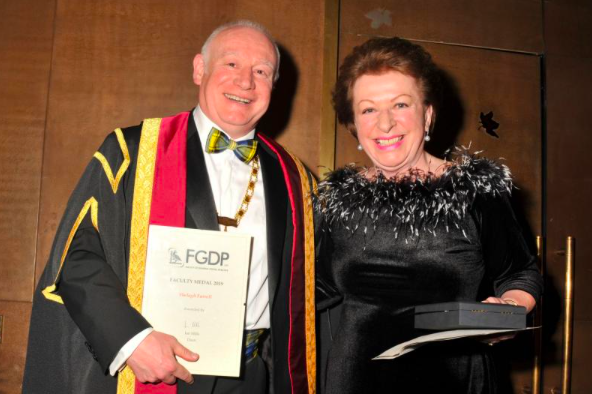 The Faculty Medal is the highest honour the FGDP (Faculty of General Dental Practice of the Royal College of Surgeons of England) bestows, and was created to recognise the most exceptional contributions to the general dental profession through the Faculty.

Shelagh qualified from Bristol in 1971, and when the Faculty of Dental Surgery introduced the Membership of General Dental Surgery – the first postgraduate qualification for general dental practitioners – she was one of the first candidates to obtain the award.

Later becoming a course organiser, tutor and mentor for the examination, Shelagh found that those that took it were enthusiastic, like-minded practitioners who wanted an academic home. The Advisory Board on General Dental Surgery, which Shelagh served on for 10 years, was then created within the Royal College of Surgeons, and she was instrumental in the birth in 1992 of the FGDP as a separate faculty, dedicated to the practice of general dentistry.

A specialist in prosthodontics, she was principal of her own practice in Bristol for over 20 years, completed an MSc at the Eastman Dental Institute, and was a part-time clinical lecturer at King’s College London.

She has served the committees and boards of the Royal College of Surgeons for over 35 years – including 25 continuous years as a member of the FGDP Board and two periods as Vice-Dean – and has also held high office at the British Dental Association, the General Dental Council and the British Society of General Dental Surgery.

A tireless advocate for postgraduate education, and for greater professional recognition for general dentistry, she has long been a leading and vocal proponent of an independent college for general dental practice, and continues to work to support the development of the College of General Dentistry.

The award was presented at the FGDP(UK) annual dinner by the Faculty’s Dean, Ian Mills, who said:

“Shelagh has made an extraordinary contribution to her patients, her peers and the wider dental profession, and her influence in particular in the establishment and evolution of the Faculty of General Dental Practice over the last twenty-seven years cannot be overstated.

“Shelagh embraced post-graduate education from an early stage in her career, and sought to constantly develop her knowledge and skills throughout her working life. This commitment to continuing professional development is now the accepted norm within general dental practice, and this is partly due to early adopters and influencers such as Shelagh, who motivated and enthused others to adopt the concept of lifelong learning.

“She has also been a pioneer in other ways, none more so than in her willingness and determination to address the gender imbalance within dental committees and organisations. She has been a role model for many women in dentistry, and has paved the way for other female dentists to get involved at a senior level.

“Shelagh is a remarkable individual, with unlimited energy, passion and enthusiasm, and I am delighted that she is the first recipient of the Faculty Medal.”

“I feel very honoured to have been awarded the first Faculty Medal, and am proud to receive it in front of so many senior figures in the profession as well as members of my family.”

Emphasising the importance of postgraduate education, she added:

“It is essential in one’s working life not only to increase knowledge, but also, with the benefit of knowledge, to pursue a more interesting and fruitful career.”

She also spoke of the important work of committees and boards, and encouraged dentists to put themselves forward for election, saying:

“Standing for election provides the opportunity to change views within and without the profession. As the Faculty moves into a College of General Dentistry – and once established, a Royal College – the profession will be able to exert much more influence on the future of dentistry and its position as part of the medical profession.”

Impact of Covid-19 by